Originally described in 1934 by Mixter and Barr, lumbar discectomy techniques have continued to evolve.  Initially, a “complete” or “radical” lumbar discectomy was advocated which included curettage of the disc space and cartilaginous endplates in order to minimize the risk of recurrent disc herniation.  This aggressive discectomy technique was later modified to include a maximal removal of disc tissue with curettage of the disc only and preservation of the endplates, termed a “subtotal discectomy”.  Spengler subsequently described a more “limited discectomy” eliminating curettage altogether but utilizing a pituitary rongeur whereby only extruded fragments and loose pieces of disc material in the disc space were removed.

In an effort to identify factors that predispose re-herniation, Carragee et al. devised a classification of disc herniation into 4 categories based upon the type of herniation and anular defect observed intraoperatively.   These authors showed that with a limited discectomy technique alone,re-herniation occurred at the highest rate (27.3%) in the context of a large anular defect (≥ 6 mm) with an extruded or sequestrated fragment (which they described as a type 2 herniation).  Although this type of herniation accounted for < 20% of cases, approximately 60% of re-herniations occurred in this subgroup.  Carragee and his co-investigators then set out to compare the techniques of a limited discectomy with subtotal discectomy for patients in this specific at-risk subgroup with type 2 herniations.  They found that while subtotal discectomy and its more extensive removal of disc material substantially decreased the rate of recurrent disc herniation (9% versus 18%), it led to inferior clinical outcomes and patient satisfaction when compared with the limited discectomy technique.   A comprehensive review of the literature performed by McGirt et al. also revealed a higher rate of recurrent disc herniation with limited nucleus removal, but a lower rate of long-term recurrent back pain.

For patients undergoing surgical treatment for intervertebral disc herniation, optimal outcomes might be achieved by combining the advantages of both the limited and subtotal discectomy techniques, i.e. by maintaining a maximum amount of disc tissue in order to minimize disc degeneration, loss of intervertebral disc height, and resulting back pain; but somehow mitigating the risk of recurrent disc herniation—especially in the high-risk type 2 herniation population.  With this goal in mind, a novel bone-anchored anular closure device, the Barricaid, was developed in order to permit a discectomy with more limited nucleus removal in the context of a large anular defect, minimizing recurrent disc herniation.  The Barricaid Annular Closure Device consists of a woven Dacron mesh which is designed to mimic the structure of the native anulus.  This mesh plug is secured to a titanium bone anchor and fixated into the adjacent bony endplate allowing it to deploy upon insertion in order to prevent recurrent disc herniation.  The Barricaid Annular Closing device has been available for many years in Europe and is now FDA-approved. 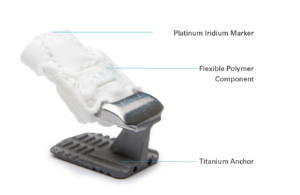 Tubular microendoscopic discectomy was introduced by Foley and Smith in 1997 as a minimally invasive alternative to traditional open microdiscectomy incorporating a muscle splitting approach using a 16-18mm tubular retractor and an endoscope.  While more technically-demanding than traditional open discectomy, the use of tubular discectomy spread widely after the adaptation of the instrumentation and technique to direct visualization utilizing an operative microscope.  Clinical outcomes have been shown to be equivalent between the techniques when similar incisions are performed, however, minimally invasive tubular discectomy holds certain advantages and popular appeal for both surgeons and patients including smaller incisions, speedier recovery, lower blood loss, and lower risk of infection.

Anular repair was initially described employing technically-challenging microsurgical suturing techniques that required an expanded laminotomy and substantially increased operative time.  Suture repair of the anulus was later refined with a device that delivered preloaded suture anchors and suture with a pre-tied knot that could be tightened to form a tension band repair of the annulus.  While this device allowed for primary suture repair of an anular incision or small anular defect, it was less amenable to repair of the large anular defects for which the Barricaid ACD was designed.

The clinical advantages of tubular minimally invasive discectomy versus conventional discectomy have been examined in different clinical studies with the tubular approach found to be safe and effective.  For both patients and surgeons, there continues to be widespread appeal for this approach.  Safe insertion of the Barricaid ACD may be accomplished through the use of a tube.

Our research demonstrates the feasibility and safety of inserting the Barricaid ACD as an adjunct to microdiscectomy utilizing a tubular minimally invasive technique.  By combining tubular microdiscectomy and Barricaid ACD implantation, the immediate advantages associated with a minimally invasive discectomy technique and the potential safeguards of a novel device are accorded to the patient.

As an expert in the field of spinal surgery and a leading orthopedic specialist, Dr. Stieber provides the most advanced surgical techniques and FDA-approved medical devices to achieve superior long-term results for patients, and a life free from disc herniation.

To learn more about mitigating your risk of re-herniation after a tubular minimally invasive discectomy, please reach out to schedule a consultation with Dr. Stieber.

Our patients' health and safety is our number one priority. Our office continues to be open for all email, telephone, and online inquiries. You can call us at 646-916-3962 or contact us via email to schedule your virtual telemedicine or in-person visit. Our doctors will be holding regular office hours for virtual video consultations and follow-up visits that permit you to stay in the comfort of your own home, utilizing your computer, tablet, or mobile device.

Additionally, we will continue to see select patients in the office for consultation and follow-up visits, including preoperative and postoperative appointments. Our doctors continue to perform procedures in our private, free-standing surgery center that offers an array of outpatient surgical services to treat spinal issues such as acute back pain, disc herniations, sciatica, and pinched nerves in the back or neck. We are also able to offer clean and efficient on-site x-ray capabilities in our office.

Please know that we join our community in taking all advised precautions* to limit the spread of the Coronavirus and ensure the safety of patients and staff.

Call today to schedule a consultation and explore your options with the Spine Center at OrthoManhattan.

The following precautionary measures have been established to ensure the safest environment possible:

Get Started Send Us A Message